From Sumbawa Road to Ilir Palembang

I finally sat down in my office, after almost a week of spending my time alone in the object handling room studying a few selected manuscripts for an upcoming project. I quickly scrolled down the photos I had taken and stopped at an image of a lithographed book, Risalah Muwafiq dan Masbuq (Book on Muwafiq and Masbuq), which was published on the 24th Jamadil Awal 1297AH (4th May 1880) about communal prayer issues. The printing location of this book is printed at the top of the title page: "Di Singapurah Jalan Sumbawa Road" (At Singapore, Sembawa Road). While at the bottom of the title page is the name and location of the publisher, "Kamal al-Din bin Bahsin Haji Kamal al-Din al-Jawi, Kampung Sepuluh Tujuh Ilir, Palembang adanya" (The person who owns the printer is Kamal al-Din bin Bahsin Haji Kamal al-Din al-Jawi of Kampung Sepuluh Tujuh Ilir, Palembang).

Curious, I messaged a friend in Singapore, “Jalan Sumbawa ni sekarang ada di mana? (Where is Sumbawa Road exactly?)”.  He pointed out that the Sumbawa Road is near the intersection of Jalan Sultan and Victoria Street, or North Bridge Road, where the site of the Darul Ta’alam Club, a Banjarese businessmen’s clubhouse was said to be founded in 1893.1 According to a map published on the Singapura Stories website, the road was located in the Kampung Rochor area, and there was also a road named Palembang Road.

Ian Proudfoot has written extensively on Singapore's early Malay printing press, demonstrating the network of printing presses and book publishers in the Malay world, particularly during the nineteenth century. This reminds me of the first lithographed printed Qur’an by Haji Muhammad Azhari bin Kemas Haji Abdullah in 1848 in Palembang. He purchased the printing press from Singapore on his way back from Makkah.

The introduction of the printing press sparked the birth of publishing houses in Singapore that were mostly centred around Kampung Gelam. I recently came across an Islamic poetry book entitled , “Syair Ibarat Menikam Pari di Tengah Laut  (Like a Stingray Stabbed in the Middle of the Sea )” that was published between 1892 to 1893, and a colophon in the book reads: “Setelah khatamlah Syair Ibarat Menikam Pari tercap di Matba’ah Haji Muhammad Said di Lorong Masjid Sultan adanya sanat 1310 (That is the end of the poem “ Like a Stingray Being Stabbed” printed at Haji Muhammad Said Press at Sultan Road in the year 1310)”. The same book is found in the collection of Singapore’s National Library. 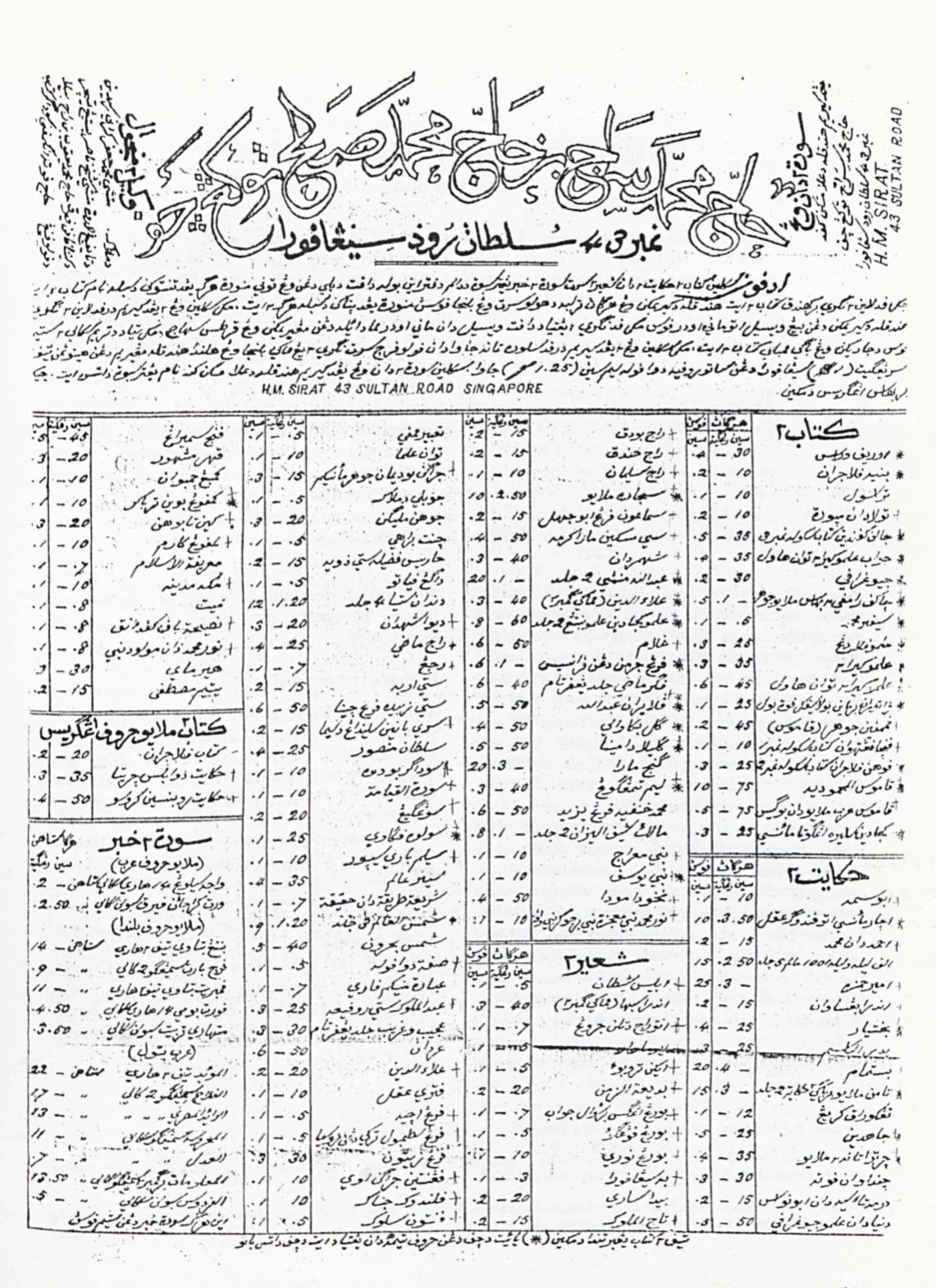 A list of books sold  by Haji Muhammad Siraj dated between 1897-98. The address of his shop is No.43, Sultan Road, Singapore.  Credit: Ian Proudfoot in A Nineteenth-Century Malay Bookseller's Catalogue, 1987.[4]

Various titles were printed by the publishing houses ranging from literature, entertainment, posters, and newspapers to religious materials, including the al-Qur’an, that portrayed the literacy standard in Jawi and perhaps Arabic among the people in the region during that era. Many publications were produced in the printing presses in Kampung Gelam, owing to the traditions of writing, copying manuscripts, and translating works written in Arabic into the Malay language that was active from the nineteenth century to the twentieth century. The books published followed every feature in a handwritten Malay manuscript tradition, such as the opening pages with decorated frames; catchphrases at the bottom page that function as a page number; and colophon at the end pages stating the name of the writer, the copyist’s name, date and place of writing, and the address of the printing press or publishers. Occasionally, there are also commentaries about the topic on the page written on the left or right margins.

The cost of printing was occasionally covered financially through endowment or patronage. For example, during Sultan Abdul Hamid II's reign (1876-1909), Syeikh Ahmad Al-Fatani was appointed as supervisor of Matba’ah al-Mirriyyah al-Kainah in Makkah. While most commercial books printed in Singapore were on literary subjects, some non-commercial Islamic books were published through endowment or waqf. For example, the Risalah Muwafiq dan Masbuq was endowed (waqf) by ‘Abd Allah bin Ahmad bin Yahya. In his book Early Malay Printed Books, Ian Proudfoot suggested that the printed religious books were not for commercial purposes and that most kitabs were sold out through contacts in the Islamic teaching networks. [5] 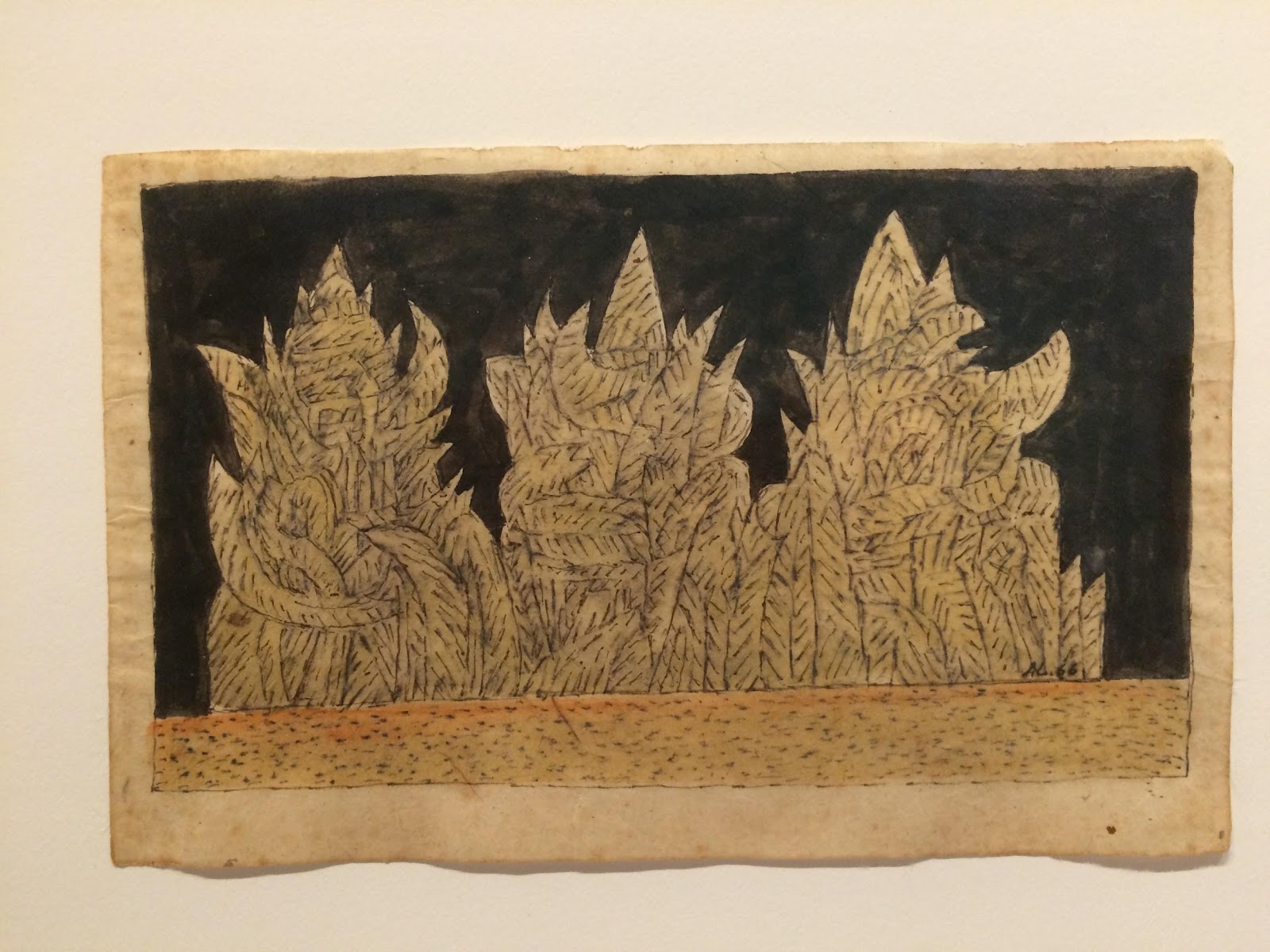 Masjid Sultan was the first place I reached that morning in late February 2019. I was admiring the architecture of this majestic mosque, which reminded me of my favourite mosque, Masjid Kapitan Keling in Pulau Pinang since both shared the similarity of having huge Indo-saracenic domes. The stretch of Bussorah Street near Masjid Sultan was once known as Kampong Khaji or Pilgrim Village as that was the centre where Muslims prepared to travel to Makkah from Singapore port for the Hajj pilgrimage. Before 1910, Bussorah street was known as Sultan Road or Lorong Masjid Sultan. The street was concentrated with printing houses, bookshops and book distributor agents owned by Muslims, especially the Javanese. However, Singapore's glory days as a printing hub in the archipelago eventually declined during the twentieth century, since the Malay and Javanese books published in Bombay, Makkah and Cairo were brought in and distributed widely throughout the Malay world.

The Masjid Sultan, established in 1824, remains a popular tourist attractions in Kampung Gelam. I recall watching a short documentary about the mosque when visiting the Latiff Mohidin: Pago Pago (1960 - 1969) exhibition at Ilham Gallery in 2018. The area has inspired Latif Mohidin in the making of his artworks. Originally from Seremban, Negeri Sembilan, Latif Mohidin moved to Kampung Gelam together with his mother since his father opened a Hajj lodge in the area.

I left Singapore with memories of Kampung Gelam ( currently, it is a Malay Heritage Centre), especially the ambience around Masjid Sultan. I recall sitting on a bench at the entrance of Istana Kampong Gelam and watching the youngsters enjoying the evening in the palace courtyard. The background noises were somehow muffled by the voices of a few people left in the mosque who were reciting melodious and beautiful supplications to Allah and glorifying the Prophet Muhammad after the Isyak prayer. I will never forget that night.

I recorded the voices on my phone, but as a poor archivist, I failed to remember where I saved them on my computer. The chance to pray Subuh prayer at the mosque, was another chance to have the whole Lorong Masjid Sultan to myself. I was standing at the pathway of Masjid Sultan, admiring the quiet lane with a couple of Indonesians who also prayed at the mosque. The cold wind blew the hanging signs of the old shophouses that once witnessed a busy place both for intellectual exchanges and spiritual journeys.

The Lorong Masjid Sultan, the street that connected every corner of these archipelagos, is still there if we continue to acknowledge its existence and history. As a Penang Islander or Orang Tanjong, Singapore’s Masjid Sultan is what Masjid Aceh means to us. Masjid Aceh and its vicinity were celebrated as a printing centre. It was also where Muslims, especially  from the northern region, prepared themselves for the Hajj pilgrimage and embarked on their journey to Jeddah Port. The network between Singapore and Pulau Pinang was established when Haji Muhammad Said’s family opened a branch office on the island in 1892. By 1898, his son, Haji Muhammad Majtahid ran the branch office and opened up a bookshop there.  One of Haji Muhammad Siraj’s successful book agents, who was also a publisher, is Haji Puteh bin Syeikh Abdul Basyir located at the address 52 Acheen Street or Lebuh Aceh. These traces of book production cultures may have been long gone, with the buildings reoccupied mainly for tourism and entertainment purposes. Still, due to the crucial historical roles in both places, the buildings live on to tell the tales of the archipelagos' once-prosperous intellectual core.

Siti Marina Mohd Maidin is a curator at the Islamic Arts Museum Malaysia.

Instilling Love of the Prophet ﷺ in our Children